1 Pandemic, 3 Threat Groups, 1 new Ransomware and a Vulnerability, what do you get? A recipe for a great hack!

As the world plunges into the pandemic chaos, cyber attackers show little or no remorse on attacking enterprises, hospitals, and critical infrastructures using sophisticated techniques. FBI has warned against the rise of cyber attacks across the globe taking advantage of the crisis. One such sophisticated technique is to exploit the vendors product vulnerability in the Client environment to leverage and expand the Attack Surface.

As the attackers try to maximise their ultimate gain from such access, with this specific threat group that we analyse in this report, they use Ransomware as their final payload to bring their target to its knees and force them to pay. These attackers with a ransomware based campaign are targeting organizations that have public facing IT administration applications running and can use these to plant ransomware on the entire network.

During the first week of April 2020, the LMNTRIX Cyber Defence Center (CDC) identified a new Ransomware attack in progress at one of our clients – a US based construction company. The client is an enterprise with all the usual security controls including NextGen Firewalls, Web and Email security together with two different types of NextGen AV, one running on their endpoints and the other on their servers and cloud infrastructure. All were completely bypassed by this attack as the ransomware took hold and started to encrypt both workstations and servers.

The following analysis of the attack and the ultimate attribution were extracted from our final report of this incident to help the community take advantage of our research and apply the IOCs supplied to your controls to help prevent a similar attack on your enterprise.

Details of the Attack:

In the following image, the attacker techniques and the details of the entire attack cycle were identified using MITRE’s ATT&CK Framework.

The attack was initiated with a brute force attack to login to the Zoho’s ManageEngine. And a proper shell was acquired by executing a known exploit against the public facing web application which was Zoho’s ManageEngine (CVE-2020-10189). Upon observing the activities of the LMNTRIX network sensors on the LMNTRIX XDR, we found that there was a brute force attack going on from external IP addresses on an internal application which was exposed externally. This application is Zoho’s ManageEngine Plus which is used for Active Directory management and administration. Upon checking the logs of ManageEngine, there were new users created for persistence. The artifacts was found placing .vbs script inside the home directories of all domain users.

The attacker enumerated the Active Directory to understand the network topology and critical server infrastructure of the company’s network.

Powershell was used to download and execute the ransomware on the machines. Both the PowerShell script and vbs scripts were identified which was used during the attack.

Fig.3. Powershell Script which was used to download the Ransomware payload.

Registry run keys were used by the attacker to maintain persistence. The following registry keys were used to download the ransomware from the URL (https[:]//www[.]solucionesajax[.]com/userfiles/chang[.]txt) and execute it on the client machines.

–    All the antivirus definitions were deleted, and all the commands were executed in the hidden windows.

–    Added a copy of itself with different name in the “C:\ProgramData” directory and installs system startup script via registry.

–    The executable was UPX modified and packed with “UPX 2.90 [LZMA] -> Markus Oberhumer, Laszlo Molnar & John Reiser’.  It was further modified manually as an anti-reversing technique.

Attackers dropped a modified version of mimikatz, named as, x64.exe to harvest user credentials from the infected systems and elevate privileges. The mimikatz commands were shortened as well to evade detection. The mimikatz performed password dump, token elevation to get NT Authority\SYSTEM

the process x64.exe is actually modified version of Mimikatz which is used to dump the credentials and elevate privileges.

Forensics analysis on the system further revealed reconnaissance on the system and network. The attackers attempted to get information from ManageEngine and the information obtained is used to gain an understanding of applications running within the network where they came to know about Citrix Application and created a similar GPO.

The Ransomware sample ‘Recover.exe’ enumerated running processes and killed most of them. Below are the Kill process details:

Attacker tried to read sensitive data from web browsers like Google Chrome and Mozilla Firefox by reading the ‘secmod’ file while encrypting the data:

–    Deleted the windows volume shadow copies and removed built-in operating system data and turned off services designed to aid in the recovery of a corrupted system to prevent recovery.

–    Renames multiple user files and performed encryption. The files were renamed with a .jest extension.

–    Sets the desktop wallpaper to deliver message, show decryption nodes and to ask the ransom with the bitcoin address.

LMNTRIX CDC team, took up lateral movement hunting to look deeper and broader throughout the network for other events that might be related. During the hunting process, it was observed registry run keys that contained suspicious certutil and PowerShell commands which were used to download the ransomware and start execution. Below is the screenshot of those registry run keys:

In the investigation phase, our team found that those registry keys were there because of a group policy. Upon performing the GPO Enumeration, the related GPO responsible for deploying these registry keys to the whole domain was discovered which was done by the attackers. It was named as “Citrix manage”. This was a tradecraft technique employed by the attacker as the victim organization was using Citrix Netscalar, so it would look legitimate GPO.

As the Group Policy refreshes every 90 minutes and spreads the registry run keys on all the systems in the domain, it makes sure if any new system joins the network it also gets infected with Ransomware.

As soon as the GPO was disabled, policy changes were updated in the entire domain. This stopped the infection process across the domain.

Once the ‘Recover.exe’ executable was executed on a machine, it performs below activities:

Below is the detailed version of all the processes and commands executed by recover.exe:

Fig.12. Details of processes and commands

The command in row 15 is actually encoded command to clear all the logs:

After successful completion of the Incident Response and Mitigation, LMNTRIX CDC was involved in the attacker attribution to figure out the threat actors legion involved on this attack. Attackers hosted their malwares on a previously breached webserver under the following URL – “https[:]//www[.]solucionesajax[.]com/userfiles/”.

Our team quickly gained access and downloaded copies of all the files present in the sub-folder used by the attackers. Upon analysis, the following information was found:

From the collected samples and banners, it was clear that multiple threat actors are directly related to these malwares. Even though the banners give out the names of attackers who were involved in the attack, the presence of multiple banners and combination of threat actors reveal that these groups have breached and placed their malwares at one point of time or another. Additionally, the malware samples resemble known RATs which have their own attribution, signifying that the attackers have leveraged the network of Black Hat hackers to purchase tools, form alliances and carry out attacks in phases.

This opportunity allowed LMNTRIX to further understand the partnership formed between different threat actors which could multiply the impact on the victim organization. To start with :-

Known For: Website Defacement – recorded over 170 defacements since June 2019.

A known hacker persona with over recorded 140 websites. The attacker had defaced the ransomware serving website “www[.]solucionesajax[.]com” on February 1, 2020

A known hacker persona who has recorded over 1000 defacements since June 2019 under their own name. Has also been a part of multiple attacks carried out by Sunda Cyber Army

A term commonly used to refer Indonesian natives. This phrase is often used by the Threat Group within its banners to show that they represent the Indonesian population and other unlisted members of the Sunda Cyber Army.

Known for: Website Defacement – recorded over 2400 defacements since March 2020.

A known hacker persona who has recorded over 1600 defacements since June 2019 under their own name. Has also been a part of multiple attacks carried out by PsychoXploit.

This attacker has been a part of PsychoXploit as a passive member. Has recorded 6 defacements under their own name but as a member of another Threat Group “Indonesian Error System”.

This attacker has recorded over 3800 defacements under their own name. Some of these are also as member of different Threat Groups – “Indonesian Error System”, “Hacker Patah Hati”, “W3LL SQUAD”.

This attacker has recorded over 1400 defacements under their own name. Some of these are also as member of different Threat Group “Indonesian Silent Coders”.

This attacker has recorded 25 defacements under their own name. Some of these are also as member of different Threat Groups – “Hacker Patah Hati”, “Sunda Cyber Army”.

A known hacker persona who has over 1300 recorded defacement attacks

This attacker has recorded 280 defacements under their own name. Some of these are also as member of different Threat Groups – “Indonesian Error System”, “Baku Hantam Cyber Team”. 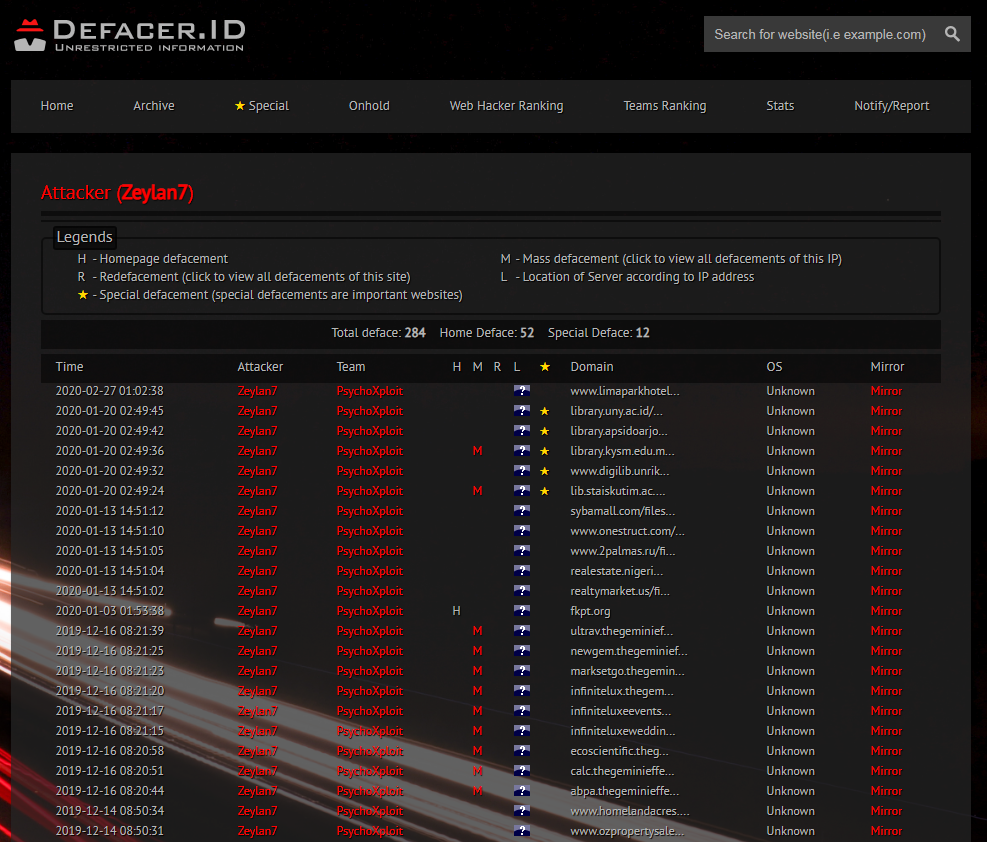 This threat group has been primarily observed to perform defacement attacks on Chinese and Singapore websites.

We have identified this hacker persona from the group who has led the defacement for ransomware serving website. 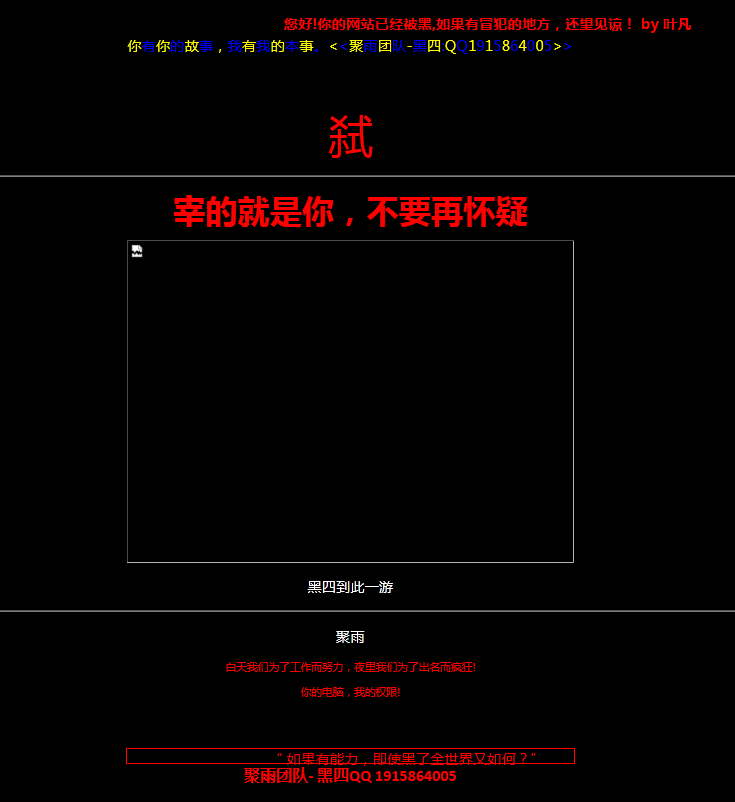 LMNTRIX CDC’s analysis of the ransomware sample reveals a Chinese connection, along with the evidence seen during the Incident Response, specifically where the attackers created AD user accounts with Chinese names, bring this Threat Group much closer to the center of attack attribution. While the other Threat Groups were involved only in the initial phase of the attack – where a website was compromised to host malicious files, this Chinese Threat Group was more involved in carrying out the actual attack – from initial infection to data destruction.